The goal of the Archives is to collect, restore, and preserve the oral and written history of the area. With the help of the Spruce Grove & District Agricultural Society, the Archives have been able to achieve their goal for over 20 years.

Please call Margaret at 780-962-3051 or Marnie at 780-962-4012 if you have archives questions, or to arrange an appointment, email: elevatorsprucegroveagsociety@gmail.com.

History of the Archives
The idea for the Spruce Grove Archives stared at the Spruce Grove Library in 1999. In 2001 the Spruce Grove & District Agricultural Heritage Society agreed that this was an important part of preserving community history and became involved with this project. They moved a trailer onto the grain elevator site and renovations were done to make this building suitable for archival material. Over the years the archives collection has grown because of the hard work and dedication of its volunteer members.

The Spruce Grove Museum is designated by the Spruce Grove and District Agricultural Heritage Society to collect, maintain, store and display items that relate to the history of Spruce grove and the surrounding District. The purpose of the collection is to show the history and development of Spruce Grove through items that reflect the local way of life. Artifacts are displayed in the workshop (white building on the Elevator Site). Many items are in storage until a new facility is built to house the collection. Because space is limited new donations will be review by a committee of volunteers before being accepted. The Museum is open each Saturday from May - September.

Your assistance in helping us preserve the history of this community is greatly appreciated! 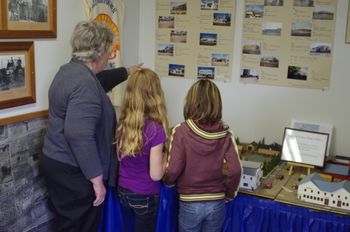 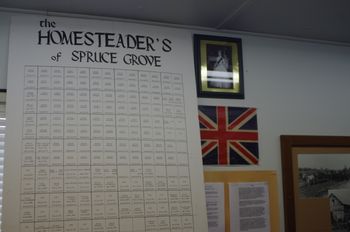 
Cree
The first recorded people in this area lived totally in tune with the plants and animals in their environments. They developed the knowledge to use shrubs and plants for medicinal purposes. Have you ever wondered what their reaction may have been to the fur traders who moved into the area?

Fur Traders
Many fur traders with the Hudsons Bay Company were of Scottish ancestry. Whitemud House (Northwest Co.) and Nelson House (HBC) both situated at the conjunction of Wabamun Creek and North Saskatchewan River in Mewassin area were built by the fur traders.
Edmonton House, 1796, was home to the Metis who arrived with the fur traders from Eastern Canada. HBC and North West Company merged in 1821, forming the Hudsons Bay Company. Coins (called beavers) were the currency of that time. Our current nickel still carries the beaver insignia from that period of our history.

Homesteaders
1872 marked the beginning of the arrival of immigrants from Europe. $10.00 was the purchase price of 160 acres, and the purchaser agreed to clear a specific amount yearly and remain on the property for three years. Only males, eighteen and over, were entitled to apply. Once British (Canadian) citizenship and other requirements were met , a title was awarded to the homesteader.

Railroad
Chinese immigrants began to arrive in this area in the early 1900’s, working mostly in railroad construction. The Edmonton Yukon and Pacific railroad, later named Canadian Northern, built the 1906 Spruce Grove townsite at mile 11.5. The Grande Trunk Pacific Railroad, later named the Canadian National, arrived in 1909 and laid out the townsite 3 miles west and 1/2 mile north of the original location. Archival maps show two locations with the same name, but the second site is the one which we know today as Spruce Grove.

Oil
The discovery of oil at the Leduc Woodbend oil field in 1947 marked an increase in the arrival of American oil workers. That field has one thousand wells today and has the potential for three hundred and seventeen million barrels. In 1948, the well Atlantic #3 in the Leduc field blew wild for six months, spilling one million barrels of oil.
In 1898 William Aldridge, an American near Waterton Lake, collected, bottled, and sold oil seepage from Cameron Creek. It was used as medicine, machinery lubricant, and cattle dip. He is the first known person to make his living from oil in Alberta.